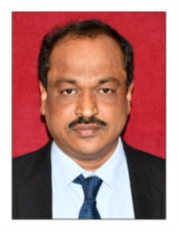 He is a Research Scientist with an innovative and multi-task-oriented leader committed to Institutional goals. Visionary operations executive with demonstrated experience in managing all facets of multi-institutional network projects including planning, budgeting, management, and delivery.  Ambitious team leader who creates strategic alliances with team members, domain experts, and the users for successful execution of projects that ensure committed deliverables. Committed to cost-effective management of resources and quality performance.

He has 28 years of work experience in two National R&D Institutes and industries as a Research Scientist, Teaching Faculty, and Tool Designer. Presently working as a Director of Central Manufacturing Technology Institute (CMTI), Autonomous R&D Institute under Ministry of Heavy Industries, Govt. of India. Before this, he served as a Chief Scientist & Head of Micro-Nano Systems Technology Group, for two decades in CSIR-Central Mechanical Engineering Research Institute, Durgapur. He concurrently holds honorary position of Adjunct Faculty at the Indian Institute of Science (IISc). In the past, he also worked as an Honorary Professor at the Academy of Scientific and Innovative Research (AcSIR) and the Indian Institute of Engineering Science and Technology (IIEST) during 2011-18.

His experience is enriched by having worked in varied roles, like as a Nodal Officer successfully implemented three major multi-institutional network projects in the areas of Micro Machines & Smart Manufacturing areas. I was also a Principal Investigator in multi-institutional international projects like Indo-EU-FP7 & Indo-US projects in related areas of micro-nano manufacturing. As a researcher and founding group leader at CSIR-CMERI  initiated a new research area ‘Micro-Nano Systems Engineering’ and established a specialized group with multidisciplinary expertise focused on the design and development of micro machines, systems, and devices. He as a founding group head mentored the team over 14 years that was resulted in the development of 12 technologies, over 100 publications, six patents, five technology transfers and four of our scientists have won young scientists awards from INAE/CSIR/IEI.

His research findings are published in 106 research papers, six patents, and three micro machines are the successfully development.  He has guided 6 Ph.D. and 18 M.Tech. Students, and 10 more Ph.D. scholars are working with him. He is serving as a Chairman and member in several national and international committees, including governing councils of other technical institutions.

He is the recipient of the ‘BOYSCAST Fellowship’ from DST, ‘Raman Research Fellowship’ from CSIR. He was one of the recipients of the ‘We Think for India’ award from the Prime Minister of India for the Indian Manufacturing Policy draft prepared in 2003. In 2017, he was awarded as a ‘Distinguished Scientist’ by Venus International Foundation. In 2021, he received the ‘Distinguished Leadership Award’ from the International Society of Industrial Engineering and Operation Management, USA. This year, he also received the ‘Eminent Engineering Professionals Award – 2021’ from the Institute of Engineers India (IEI).   He is the member of the International Association of Engineers, UK, and a Member of the International Institution for Micromanufacturing (I2M2), USA.